Blue is the most popular favorite color in the world. Depending on the shade, blue can remind you of a bright summer sky, the deepest parts of the ocean, or sparkling jewels. However, if you’re choosing a color for a paint project, you have a wide variety of options. As a result, you may wonder, “What’s the difference between navy blue and royal blue?”

Overall, navy blue is a deeper color than royal blue. The deep hue of navy blue can allow it to be neutral, as the tone isn’t overwhelming. However, royal blue has a sense of vibrance that stands out against the darker, moodier navy blue.

Ultimately, while both navy and royal blue are shades of blue, they’re distinctly different. If you’re wondering how the two stand apart, here’s an in-depth look at navy blue vs. royal blue. 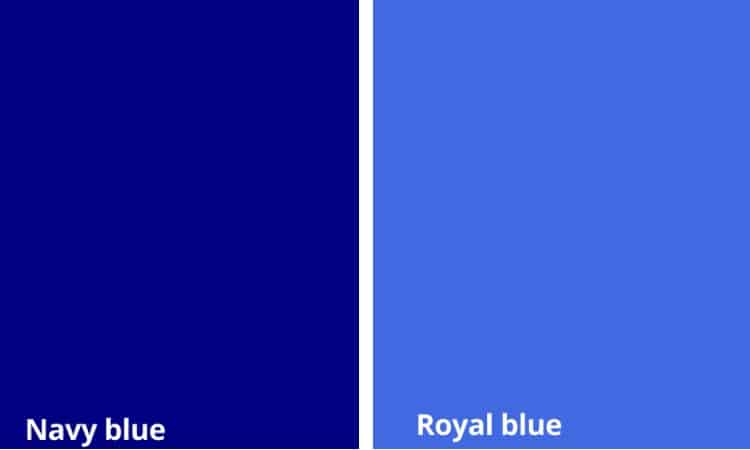 As mentioned above, the biggest difference between navy blue vs. royal blue is brightness, with navy blue being dark and rich while royal blue is lighter and more vivid. However, the two also stand apart in other ways.

Since there are distinct differences between navy blue and royal blue, it’s wise to take a closer look at how they stand apart. Here’s an overview of the key points when comparing navy blue vs. royal blue.

What Is Navy Blue? 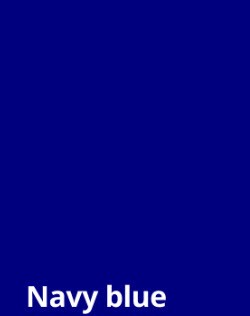 Navy blue is a deep, dramatic shade of blue that’s typically close to black. Since it isn’t overly vibrant and can visually recede, it’s often treated as neutral, as it pairs well with a wide array of shades.

Generally, navy blue doesn’t feature tinges of green or purple, instead sitting well within the blue range. However, lighting conditions can impact the look of navy blue and fabric choices when it’s used on clothing.

What Is Royal Blue? 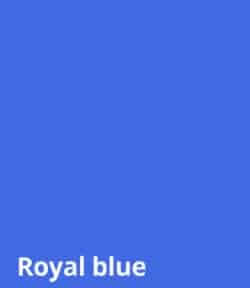 Royal blue is a vibrant, mid-toned blue that feels vivid without imbuing a space or outfit with too much energy in the right quantities. It’s attention-grabbing, though not overly so, and has a sense of opulence due to its association with royalty. While it doesn’t fully act as a neutral, it pairs well with various colors.

Royal blue is a “true” blue, which doesn’t lean into the green or purple territory. Instead, it feels firmly in the blue range.

What Is the Difference Between Navy Blue and Royal Blue? 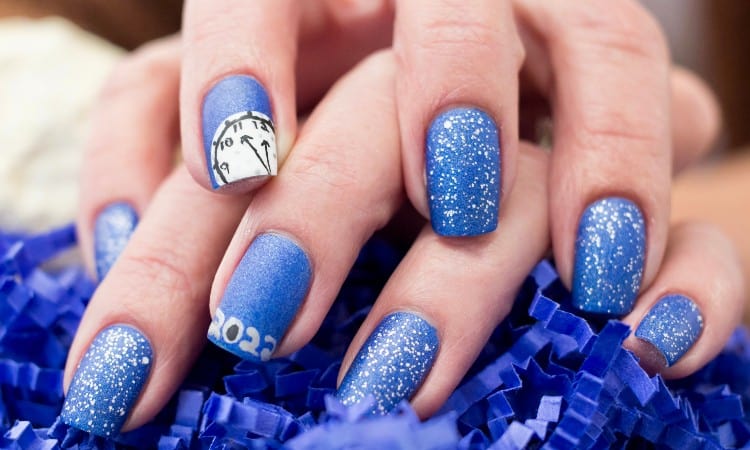 While the overviews above give you a solid baseline on how navy blue and royal blue stand apart, taking a closer look at each key point is still worthwhile. It allows you to understand the differences in greater detail, making it easier to choose the right option.

Here’s a look at the differences between navy blue and royal blue.

In most cases, navy blue is a color that symbolizes confidence, authority, and unity. It can also be viewed as a secure color, associated with professional uniforms for various professions meant to keep people safe and protected.

Royal blue is generally considered a color of royalty due to its origins. As a result, it’s also associated with confidence, sovereignty, superiority, and trust. There’s also a connection with celebrations, particularly since royalty donned the color during parties, and it’s a shade commonly seen at weddings.

Overall, navy blue is generally considered a serious or formal color. It’s a popular choice for a wide array of uniforms, including some worn by pilots, police officers, and certain military members. Partially, this is because it was initially selected as a navy uniform color in 1748, giving it a long history of use in that regard.

Royal blue has an association with royalty thanks to Princess Charlotte of Wales. She donned a vibrant blue Russian gown in a portrait she received in 1817. The image is world-renowned and is a foundation for why this lively blue shade is connected to royal families.

As for the wedding association, it’s partially attributed to the tradition of brides having a “something blue” on their big day. While there isn’t a requirement for royal blue specifically, many choose a more vibrant shade of blue for this occasion, with royal blue being a popular option.

Generally speaking, most shades of blue are popular compared to other colors; however, navy blue has an edge when looking at navy blue vs. royal blue.

Navy blue is functionally neutral, so people commonly buy attire in that hue because it coordinates well with nearly any other color. Plus, it has a degree of formality, which works well in formal living and dining areas, business attire, and more.

Royal blue is less popular since it’s still quite versatile but doesn’t function as a true neutral. Additionally, not everyone prefers higher-intensity colors. Since navy blue is more subdued, it’s got a stronger overall following.

Royal blue is generally considered a moderate to high-intensity color. Whether it falls on one side of the line or the other can depend on what it’s paired with, how bright a room is, and other factors.

Navy blue is low-intensity, and not just by comparison. The color is usually deep and rich, often coming close to black. Even in bright lighting conditions, navy blue isn’t a vibrant shade.

When it comes to the history of navy blue, its roots are based on the deep hues used in British Royal Navy uniforms in the 18th century. That connection is why the shade is referred to as “navy” blue, as it was viewed as a distinguishing characteristic of that type of military attire.

As mentioned above, Princess Charlotte of Wales wore a vibrant blue dress captured in a portrait. However, the origins of the shade date back a little further. King George III was searching for a color suitable for royalty, and the color chosen was ultimately referred to as royal blue.

Navy blue is a formal color that’s typically associated with uniforms, though it also acts as neutral. As a result, you’ll find it in a wide array of attire, including business suits, jeans, sweaters, and more.

You can find navy blue interior and exterior paint, too. While it isn’t always a widely used option since it’s incredibly dark, some people are bold enough to use it in certain situations. For example, it can work well for accent walls or entire rooms, suggesting the room is large enough and bright enough to support a deep hue.

Royal blue is usually more common in fashion attire since it’s higher intensity. However, it’s also reasonably available in textiles, as people who enjoy more vibrant colors but want something generally crowd-pleasing may prefer it.

When it comes to paint, royal blue isn’t as widely used since it’s higher intensity. While many consider it a calming shade, too, the strength of the hue can overwhelm smaller spaces. Additionally, some may see the color as a bit childlike, as it’s popular in attire, toys, and bedding created for children. 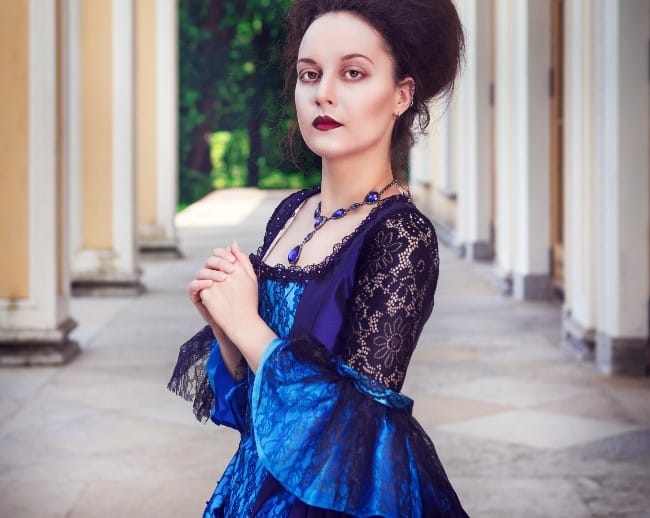 Royal blue and navy blue aren’t matching shades. However, they can pair well together since they’re different enough to stand apart. Plus, they can create a monochromatic look that isn’t too matchy-matchy, adding visual interest without becoming overwhelming.

What Colors Go with Navy Blue?

As a functional neutral, practically any color pairs well with navy blue. Whether you want a contrasting shade like gold, a brighter neutral like white or light gray, or a moody hue like dark cranberry, it can all work with navy blue.

What Matches with Royal Blue?

Since royal blue is brighter, it isn’t a true neutral. However, it pairs well with various colors, including orange, magenta, yellow, and green. White, ivory, and beige are also good choices for royal blue.

What Color Is Between Navy Blue and Royal Blue?

If you’re looking for a color between navy blue and royal blue, your best bet is cobalt blue. It’s a moderate-intensity shade that feels distinct and vibrant, but it isn’t as bright as royal blue or as deep as navy blue.

In most cases, the color navy blue is most commonly confused with black at a glance. Navy blue can be incredibly dark and may look black, particularly in low-light conditions.

Navy blue and regal blue can get mixed up, as well. Both are rich shades, though regal blue is a slightly steely color, and many even exhibit tinges of green that you don’t find in navy blue.

People confuse royal blue with several shades. Some get it mixed up with navy blue since they assume there’s a level of formality associated with royal shades. Others may get the name confused with regal blue, which is a deeper, steely blue.

As mentioned previously, navy blue is a deep, dark shade, while cobalt blue is more of a mid-toned hue. As a result, cobalt blue is noticeably brighter than royal blue.

When it comes to the nature of the hue, both navy blue and cobalt are reasonably balanced. Neither leans green or purple, instead, mainly sitting near the center of the blue range, albeit with varying intensity.

Which Blue Is Better: Navy or Royal?

Technically, neither navy blue nor royal blue is better than the other. Each works well in different situations, so it depends on your preferences. Navy blue is deeper and more neutral, while royal blue is brighter and has a sense of vibrance, so choose the option that best fits the situation.

Did you find out everything you wanted to find out about navy blue vs. royal blue? If so, let us know in the comments section below. Additionally, if you know someone trying to choose the perfect shade of blue for their next project, please share the article.

PaintTopics.com is a participant in the Amazon Services LLC Associates Program, an affiliate advertising program designed to provide a means for sites to earn advertising fees by advertising and linking to Amazon.com